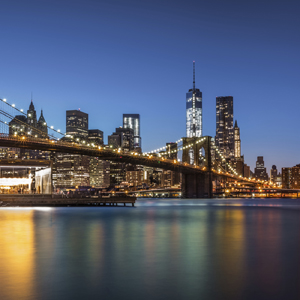 Between the urban allure of New York City and the rugged beauty of “upstate,” New York has something for everyone. Manhattan boasts iconic landmarks, such as the Statue of Liberty and the Empire State Building. North and west of the city lie the historic Hudson Valley, the majestic Adirondack Mountains, and the roar of Niagara Falls.

There are a multitude of locum tenens opportunities in New York right now for providers specializing in emergency medicine, pediatrics, psychiatry, and other areas of practice. Wherever your assignment takes you, from the sandy Long Island beaches to the pristine Finger Lakes, you are sure to find historical sites, captivating landscapes, and scrumptious eateries.

New York State’s rich cultural history spans many centuries and hundreds of miles. With more historical landmarks than any other state, you are always near something worth seeing.

Located on Lake Champlain in the shadow of the Adirondack Mountains, this remote post guarded the waterway connecting New France with Britain’s American colonies. It was later the site of the first American victory of the Revolutionary War. Today, visitors can enjoy living history events, garden tours, fife and drum music, and much more.

This former aircraft carrier fought in World War II, surviving five kamikaze attacks and one torpedo strike. It later served in the Cold War and the Vietnam War. USS Intrepid is currently berthed on the Hudson River on the west side of Manhattan, and home to the Intrepid Sea, Air & Space Museum.

The Hudson Valley is a virtual showcase of estates built over the years by wealthy politicians, businessmen, and socialites. In Hyde Park, Springwood (home of Franklin D. Roosevelt), Val-Kill Cottage (country retreat of Eleanor Roosevelt), and the Vanderbilt Mansion are all within a few miles of each other and offer a peek into the high society of yesteryear.

Aptly nicknamed “the city that never sleeps,” New York City offers a vast array of entertainment to accommodate any schedule. Or, if your locum tenens contract takes you north or west of the city, there are festivals and outdoor adventures statewide, for every season.

No other city does theater like New York. Ornate buildings with neon-lit marquees host some of the best shows in the world. Peruse the offerings at 40 Broadway theaters, or one of the “off-Broadway” theaters, which are typically smaller in size.

This 10-day celebration every February commemorates the area’s history in the ice trade, when countless blocks of frozen water were cut to serve the refrigeration needs of turn-of-the-century cities. Today, visitors will find a breathtaking Ice Palace made of ice blocks, as well as parades, exhibits, concerts, and stunning fireworks shows.

Known as the “Grand Canyon of the East,” Letchworth State Park offers some of most splendid scenery in the eastern United States. Here, the Genesee River thunders through the gorge over three waterfalls between cliffs reaching 600 feet. Trails abound for hiking, horseback riding, biking, snowmobiling, and skiing. Hot-air balloons rides are also available.

Between the city’s ethnically diverse restaurants and upstate’s farm markets, orchards, and wineries, everything is on the menu in New York State.

Taste of Buffalo in Buffalo

Billed as the largest two-day food festival in the country, this tasty summer fest showcases Buffalo’s favorite regional foods from more than 50 local restaurants and seven wineries. Get your chicken wings, beef on weck, and much more.

The Oyster Festival in Oyster Bay

Unique dishes featuring oysters, clams, and hordes of other seafood draw more than 200,000 people to Long Island each October for the East Coast’s largest waterfront festival.

The second-largest apple-producing state in the country, New York offers up 29.5 million bushels each year. Pick your own at farms throughout the state, and check out fall festivals, such as the Warwick Apple Festival and the Ithaca Apple Festival.
Care to share other New York hot spots? Tells us by leaving a comment about the cities you’ve experienced in the Empire State.