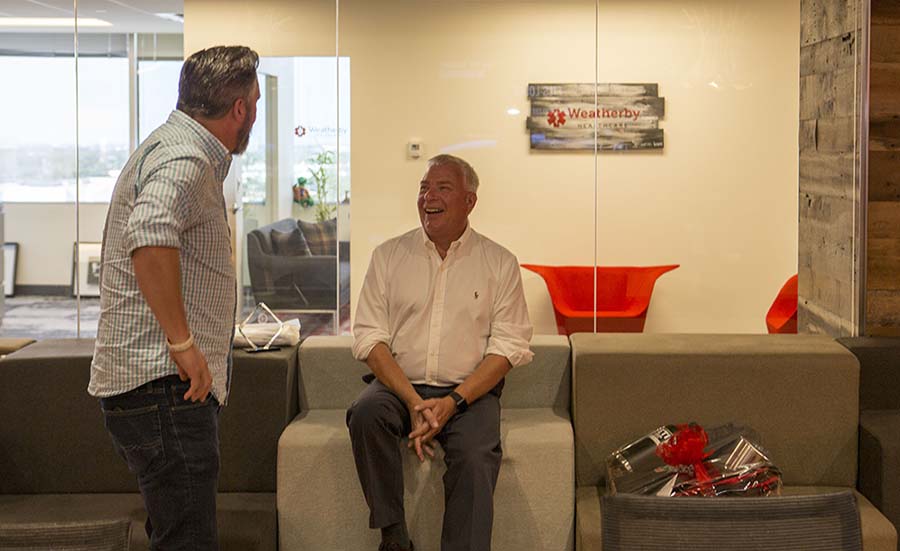 With a hurricane looming in the distance, Dr. Demetri Poulis is easy-going and affable. It’s not just another day, as we know the impact of this year’s hurricane season, especially Irma, but talking to him almost has a calming effect. He’s steady, humorous, and engaging.

His recipe for a time like this? Gather some friends and “watch old movies and hang out.”

It’s this steady and unflappable demeanor that has no doubt helped him be a successful surgeon. And what has earned him recognition as a Locum Tenens of the Year award winner.

an example of what it means to be a locum tenens professional.

Based in The Outer Banks, Nags Head, North Carolina, Dr. Demetri Poulis works full time as a locums provider. In fact, he provided nearly 250 days of coverage in 2016, making 39 round trips to and from assignments.

When speaking about his whirlwind schedule, he laughs, “Somebody did tell me that, I think, I flew the most segments last year. There were points where I would come in on a Sunday night and leave on a Monday night. The flight attendants literally knew me by first name. It was great.”

But it’s not all about travel and adventure. Dr. Poulis cites two key areas which locum tenens can help surgeons, and doctors across all specialties.

First, he enjoys the lifelong learning that comes from being inside the operating room of multiple facilities. He speaks passionately about how locums is a great way to keep the work exciting while staving off becoming lethargic.

The second benefit is that he knows his work makes a difference every day.

“Part of the thing is when you go to these little places they really need someone. Usually they’re grateful that you’re there and they really extend everything to you. I can’t say that I’ve had a bad time, perhaps one but that was at the beginning. Ever since then, they’re grateful and I’m grateful for being there.”

For Dr. Poulis, it really comes down to finding balance. He has worked permanent positions before, and understands the draw. He spent 11 years as the only surgeon at a newly opened hospital in the Outer Banks. He was on call every day. It admittedly wore him down. That was when he thought about trying locum tenens.

“I was telling someone the other day that this summer has been the happiest I’ve been in about 12 years.”

With locum tenens, Dr. Poulis gets to choose his schedule. This has opened up opportunities for him that he cherishes. Despite his heavy assignment load, he still finds balance in his personal life. His travels have taken him to New York to visit his daughters, and he has found time to do the things he enjoys.

“I travel. I surfed this year because I live on the ocean,” he says. “I go see my sister up in Portland, Maine. I’ve been to Asia. I’ve been out west. I’ve done more in the last two years than I’ve done in the previous ten.”

He continues, “That’s one thing for surgeons is time. We make enough money but we don’t have enough time because a lot of places there’s only one surgeon and you’re just there.”

Making the switch to the locums lifestyle

While making the switch to locum tenens has been great in retrospect, he was admittedly a little apprehensive. It took a bit of coaxing to feel convinced. His Weatherby consultant, Hopal Watson, spent a couple months discussing it with him before he threw his trust to her and they served their first assignment in Maine. In wintertime. It was a great test and they’ve been working together ever since.

“I just can’t say enough about Hopal Watson. I have trusted her from the beginning and she has been awesome. She has helped me get through things that I wasn’t sure about. She’s always given me good advice. She’s made it doable.” He concludes, “If I could give a prize for the Weatherby consultant of the year it would be her.”

We at Weatherby Healthcare are honored to work with a provider of Dr. Poulis’s caliber and caring. He exemplifies the highest level of professionalism and we are happy to recognize him as a Locum Tenens of the Year winner for 2017.

Spencer Sutherland is the senior public relations manager at CHG Healthcare Services and has been writing about healthcare for more than a decade.