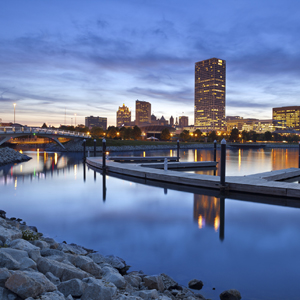 It may be called America’s Dairyland, but there’s more to Wisconsin than cheese or its other famous products: beer, the Green Bay Packers, and the Milwaukee Brewers. The state offers an array of attractions, from unexpected historical sites to eclectic entertainment and fantastic food (cheese included). So if you’re heading anywhere in the Badger State for a locum tenens opportunity, especially within the in-demand specialties emergency medicine, psychiatry and neurology, check out the uniqueness that is Wisconsin.

You can see Wisconsin’s history on display throughout the state, including some surprising contributions to its story.

Did you ever think you’d come across an archaeological site in the Midwest that resembled the Aztec pyramids? In 1836, scientists discovered a Middle Mississippian village that dates back somewhere between 1000 and 1300 A.D. Today, visitors to Aztalan State Park can climb the flat-topped, pyramidal mounds; hike through the woods; or kayak on the Crawfish River.

Take a trip back in time to this medically themed museum. Examine some of the major discoveries that have helped develop the study of medicine, such as the iron lung, various instruments, and illustrations of surgery throughout the decades.

This community on the shores of Lake Michigan is renowned for its shipbuilding industry, so it makes sense it hosts the Wisconsin Maritime Museum, which is also home to the USS Cobia. Take a tour of the World War II submarine or sign up for an overnight stay.

Summer in Wisconsin is jam-packed with all kinds of entertainment, including Summerfest, the world’s largest music festival—11 days and more than 1,000 performances. However, you don’t have to wait until June for the fun to begin.

At the Landmark Lanes you can, of course, bowl a few frames. But if you’re not much of a pin-buster, then head to the arcade to play classic games, like Ms. Pacman, pinball, or air hockey. The venue also features pool tables, darts, foosball, and interesting cocktail specials.

Ski-what-ing? For those not in the know, skijoring is a combination of cross-country skiing and dog sledding. The human is on cross-country skis and harnessed to a dog that does the pulling. So if you bring your canine companion along on a locum tenens contract in the winter, see if he/she wants a snowy adventure for the two of you.

This combo offers a retro twist to “dinner and a movie.” First, pull into The Kiltie Drive-In restaurant for an authentic carhop service. Order a burger or indulge with a homemade frozen custard (yes, custard, not ice cream). Then, drive to the Highway 18 Outdoor Theater to catch a flick on the 90-foot screen from the comfort of your car.

While it’s true Wisconsin is synonymous with cheese—did you know fresh cheese curds squeak when bitten into?—it also serves up other legendary food finds, including Friday fish fries in just about any eatery.

You’ll be guided to some of the famed restaurants around the state capital, including Merchant (offering a special menu from 10:30 p.m. to 1:30 a.m., Sunday through Thursday), Ian’s Pizza, and Fromagination, a specialty cheese shop. You’ll end up at the University of Wisconsin-Madison Memorial Union terrace, overlooking Lake Mendota, where you can order an ice cream from Babcock Dairy, which is also on the campus.

Although harvesting takes place in late summer, you can savor the sweet taste of the peninsula’s famed crop any time, thanks to jams and preserves. Also, sample a cherry salsa, cherry wine, or cherry sausage.
Kringle, statewide

In 2013, Wisconsin lawmakers officially designated the kringle as the state pastry. Go ahead and bite into this flaky pastry dough filled with fruit and nuts, and topped with sweet icing, traditionally formed into a circle.

Do you know of other Wisconsin hot spots? Tells us by leaving a comment about the cities you’ve experienced in America’s Dairyland.